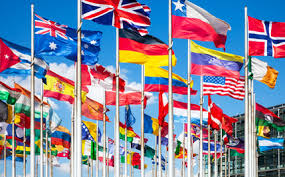 The international relations many structures of expectations are formalized, involving written agreements, contracts, or treaties defining the rights and obligations of cosigners. Some structures of expectations (like the UN Charter) formalize law norms, which define the membership in the structure, the rights and obligations of members, and authoritative roles. The Authoritative roles are those that within the structure of expectations carry the right to give certain commands for their incumbents and the obligation to obey for the other members. They carry the right to punish disobedience. In the development of law norms and authoritative roles evolves the sociological group. In international society the state is one of the groups. An international organization is another.

In this sense, an international group is a point of equilibrium, a balance of values and norms. Without knowledge of the prior conflict process or the possible future disruption, a group such as Ethiopia, the Arab League, or the Warsaw Pact may appear stable. Consensus and functional maintenance will appear the case, as indeed it is if one views a group’s history only through the existing, formalized structure of expectations. But as within states, where such groups as families end in divorce, churches dissolve in schism, and corporations are destroyed, states, international organizations, and the largest of all social groups, the international system, undergo disruption and revolutionary change. But, on the other hand, to focus on the becoming, on the conflict or disruption, is to ignore the periods of order, of regularity, of harmony and consensus identified with a tolerable balance of powers.

“War is a matter of vital importance to the State; the province of life or death; the road to survival or ruin. It is mandatory that it be thoroughly studied.”

The theories of interstate war, which have dominated the International Relations literature on international conflict until fairly recently. True, the focus of war studies in the International Relations field has shifted significantly in the last decade in response to the shift in the nature of war away from interstate war and towards civil war, insurgency, terrorism, and various forms of communal violence. The study of intrastate war, which was formerly located primarily in Comparative Politics and which was primarily descriptive in orientation, is now part of the broad mainstream of the peace/war/security subfield, and cuts across traditional boundaries between the fields of Comparative and International Politics.

Since the international relations lacks a central government with a monopoly of power states are insecure. Their protection depends on themselves and what faith they can put in their allies. This insecurity will breed arms for defense. Moreover, each state must itself right injustice done against it. The reliance on self-help, the security dilemma, that each state faces, creates a constant disposition to violence, a state of war.

All international relations are not state of violence on the other hand. Among Canada, the United States, United Kingdom, Australia, New Zealand, France, Belgium, Netherlands, Norway, Sweden, and Switzerland there is simply no expectation of non disposition to violence. Problems arise in their relations, conflicts do occur, but none prepares for or entertains the possibility of violence against the other.

The 20th century was the most murderous in recorded history. The total number of deaths caused by or associated with its wars has been estimated at 187m, the equivalent of more than 10% of the world’s population in 1913. Taken as having begun in 1914, it was a century of almost unbroken war, with few and brief periods without organized armed conflict somewhere. It was dominated by world wars: that is to say, by wars between territorial states or alliances of states.

War Crimes and Just War remains an excellent book—a pleasure to read, and one of the very few to consider searchingly the deepest moral and political roots of just war theory and the international laws of armed conflict. It offers a unique, refreshing, and important contribution to just war theory in its attempt to blend law with morality, and to revive a virtue ethics reading of the relevant principles. Whether one agrees with May’s approach or not, this is essential reading for anyone interested in the concepts of just war.

War and the Environment

In 1998, the environmental group Green Cross International sent a team of four scientists to Kuwait to investigate the environmental effects of the Gulf War seven years earlier. What the team found was very different from the surreal inferno of burning oil wells that had been the scene in 1991: a quiet desert, green with waving grasses. As the team wrote in its report, however, “other problems are literally below the surface and one needs only to scratch the desert to find the remains of the continuing environmental damage”-for example, spilled oil that continued to percolate through the porous soil and threaten Kuwait’s meager freshwater aquifers.

Several recent wars in varied environments and different parts of the world reveal that the ecological consequences of war often remain written in the landscape for many years. But the story is not always straightforward or clear. Instead, the landscape is like a palimpsest-a parchment written on, scraped clean, and then written over again-on which the ecological effects of war may be overlain by postwar regeneration or development. Yet looking carefully and in the right places can allow the history of past human conflicts to be read in the landscape.

Of course, wars are not the only events that leave their signature on the land. “This is essentially true of all impacts on ecosystems,” says John Hart, a conservation scientist based in the Democratic Republic of the Congo-floods and hurricanes, for example. “So it really puts conflict into the context of natural history.”

In many areas the invasive grasses and bamboo thickets that replaced inland hardwood forests are still present. A mid-1980s study by Vietnamese ecologists documented just 24 species of birds and 5 species of mammals present in sprayed forests and converted areas, compared to 145-170 bird species and 30-55 kinds of mammals in intact forest.

But, says Pam McElwee, assistant professor of global studies at Arizona State University, “it’s hard to say conclusively what changes are a direct result of the war.” Are degraded forests a direct consequence of herbicide attack, or are they the result of fuelwood gathering and forest clearing for small-scale agriculture by a war-torn country’s desperately poor population? (And couldn’t both possibilities be considered to reflect the ecological effects of war?)

Ending armed conflict has long been a concern of practitioners and scholars of International relations. Recent years have seen new attention to questions of ‘‘building peace’’ beyond the immediate termination of war, primarily driven by the experience of civil wars in the 1990s and the very mixed record of international involvement —from relative successes like Namibia, Mozambique, and El Salvador through partial successes like Cambodia, Bosnia and East Timor to abysmal failures like Angola and Rwanda.