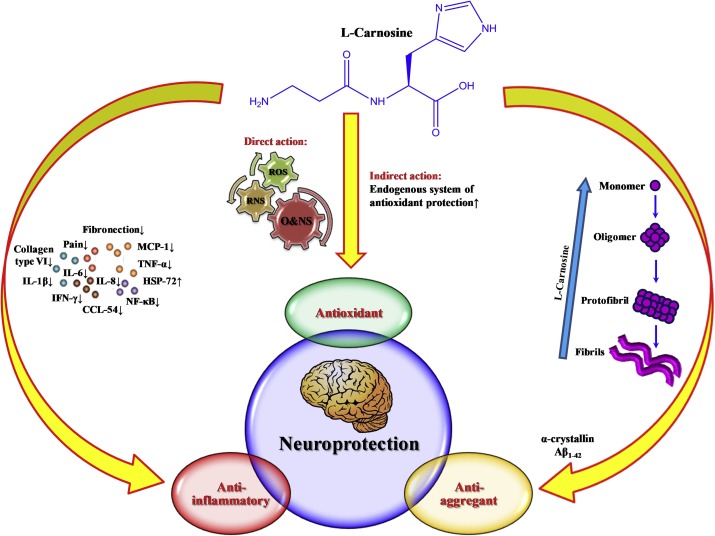 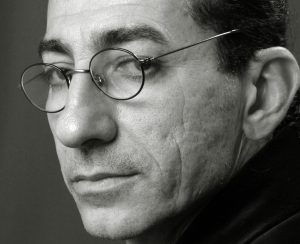 Incubation of cultured slices of the olfactory cortex from rat brain with L-carnosine in concentrations of 50, 250, and 500 μM induced activation of glutamatergic and GABAB- ergic mechanisms and facilitated long-term posttetanic potentiation. The effect of L- carnosine is mediated by its effect on AMPA- and NMDA-related glutamatergic receptors and on inhibitory GABAB receptors.

The role of L-carnosine (-alanyl-L-histidine), a na- tural hydrophilic dipeptide, in the regulation of natural antioxidant status of the body is well proved [1]. Antioxidant and antiapoptotic effects of this dipeptide demonstrated on isolated neurons and on cultured nerve cells are used in the treatment of neurodegene- rative diseases, ischemic brain injuries, etc. [6,7,12].

Application of 2-5 μl 500 mM L-carnosine on the glomerular layer of the olfactory bulb produced an activating effect and increased the frequency of action potentials in the lateral olfactory tract. In

cultured slices of rat olfactory bulbs, L-carnosine added to the incubation medium to a concentration of >50 μM potentiated inward currents in neurons [8]. At the same time, other authorities showed that L-carnosine produced no neurotropic effect, be- cause even in a concentration of 1 mM it did not initiate membrane current in olfactory bulb neurons, but modulated the effect of copper and zinc ions affecting NMDA and GABA receptor-dependent po- tentials and synaptic plasticity [4]. L-carnosine is suc- cessfully used in clinical practice as an exogenous preparation for the treatment of neuropathologies. In light of this, it was interesting to study neurotropic and plastic effects of L-carnosine under conditions of its exogenous application on the nervous tissue.

In the present work, we studied the effects of application of L-carnosine in different concentration on parameters of pre- and postsynaptic components of focal potentials (FP) and its influence on the develop- ment of long-term posttetanic potentiation/depression (L TP/L TD) in cultured slices of rat olfactory cortex.

All experimental procedures with cultured slices of rat olfactory cortex and recording of FP were de- scribed previously [2].

Here we studied neurotropic effects of applica- tion of exogenous L-carnosin (Sigma) in concen- trations of 50, 250, and 500 μM on brain sections. These concentrations were chosen because the con- centration of this dipeptide in cells of the olfactory system is 1-5 mM [7].

Experiments were carried out as follows. After 15-min recording of control FP in slices, they were perfused for 20 min with an incubation medium containing L-carnosine, and then washed for 15 min. L-carnosine was dissolved in incubation me- dium immediately before the experiment. The fre- quency of stimulation of the olfactory tract in the control and under the effect of L-carnosine was 1 pulse per 5 min.

The amplitude of stimulatory and inhibitory components of FP with the corresponding mecha- nisms of genesis and mediated by different receptor systems were analyzed: summary action potential (AP) of the lateral olfactory tract (presynaptic com- ponent of FP), AMPA and NMDA receptor com- ponents of the stimulatory postsynaptic potential (SPSP), and late inhibitory postsynaptic potential (IPSP) generated during activation of GABAB re- ceptors.

In experiments with evaluation of plastic ef- fects of L-carnosin, the scheme of the experiment was as follows: recording of control FP and than electrical tetanization of the lateral olfactory tract with a frequency of 100 Hz for 25 sec with an in- terval of 5 sec against the background of continu- ous perfusion of the slices with a medium contai- ning L-carnosine. The development of L TP/L TD was analyzed.

The data were processed statistically using non- parametric Mann—Whitney U test. The differences were significant at p0.05.

We studied neurotropic and nootropic effects of L- carnosine on the function of glutamatergic and GABAB-ergic synaptic mechanisms.

L-carnosine in concentration of 50 μM increa- sed the amplitudes of individual FP components in slices of the olfactory cortex (amplitude of AMPA SPSP increased by 25%), which significantly dif- fered from the control (U=8; control n=7, carnosine n=7, p0.05). The increase in the amplitude of NMDA SPSP by 10% was insignificant. Activity of GABAB-ergic mechanisms (IPSP) increased most markedly (U=5, control n=7; carnosin n=7; p0.05). After washout, activity of stimulatory processes returned to the control level, which was seen from their amplitudes. In contrast to stimulatory pro-

The effect of L-carnosine in a concentration of 250 μM on glutamatergic synaptic transmission manifested in an increase in AMPA SPSP amplitude by 22%, which significantly differed from the con- trol (U=12, control n=10; carnosine n=12; p0.05; Table 1). The amplitude of NMDA SPSP increased insignificantly (by on average 6 %). In contrast to stimulatory glutamatergic mechanisms, the inhibi- tory GABAB-ergic mechanisms were activated by on average 38 % (U=9, control n=10; carnosine n=12; p0.05). After washout, the amplitudes of AMPA and NMDA SPSP returned to the control values (Table 1). Activity of GABAB-ergic mechanisms was still elevated after washout, which was seen from high IPSP amplitude (Table 1).

Increasing the concentration of exogenous L- carnosine to 500 μM induced an insignificant in- crease in amplitudes of AMPA and NMDA SPSP (Table 1). We also observed a significant increase in IPSP amplitude (U=11, control n=10; carnosine n=12; p0.05, Table 1), similar to that observed after application of lower concentration of the di- peptide. After washout, the amplitudes of AMPA and NMDA SPSP decreased to the control level compared to those observed during L-carnosine application. The amplitude of IPSP surpassed the

The observed neurotropic effects of exogenous application of L-carnosine on slices of rat olfactory cortex prompted us to study the effect of this di- peptide on plastic properties of glutamatergic syn- aptic transmission in rat olfactory cortex. The ap- plied model of LTP development is considered as a model of nonassociative learning [5,9]. In control experiment, tetanization of slices induced three different types of plastic reactions: long-term post- tetanic potentiation (L TP , 45% slices), long-term posttenanic depression (LTD, 47% slices), and in 8% slices plastic changes were absent. Application L-carnosine in concentrations of 50-500 μM on slices shifted symmetrical L TP/L TD distribution observed in the control and led to induction of LTP in 91-97% slices. Thus, the use of L-carnosine in the specified concentrations completely suppressed the development of LTD.

NMDA receptors with different synaptic loca- lization and subunit composition are involved in various forms of plasticity in adult mammalian cor- tex. One form of LTD induced by postsynaptic mechanisms easily develops in adult mammalian cortex during activation of NMDA receptors; it should be emphasized that LTP requires activation of a certain receptor subunit, while LTD is me- diated by receptors containing another subunit [10]. It was found that activation of NMDA receptors in cultured olfactory neurons depends on the applied concentration of L-carnosine acting as a modulating agent. L-carnosine added simultaneously with zinc in a concentration <1 mM little modulated the ef- fect of zinc on NMDA- and GABA-related currents, while at low concentrations of the peptide (100 μM) it completely suppressed the antagonistinc effect of zinc on membrane currents induced by activation of the receptors with agonists [4].

In our experiments, L-carnosine produced a neurotropic effect on slices of the olfactory cortex by acting on ionotropic glutamate receptors; these effects also depended on the concentration of the dipeptide, AMP A receptors being most sensitive. However, modulation of activity of inhibitory GABA -ergic mechanisms was the most pronoun- B  ced neurotropic effect of L-carnosine. L-Carnosine in all studied concentrations activated the inhibitory mechanisms and hence, shifted the balance be-

tween stimulation and inhibition in cortical struc- tures towards the inhibitory processes. This could lead to inhibition of LTP development and facilita- tion of LTD. Despite these effects, exogenous L- carnosine promoted L TP and suppressed L TD. This discrepancy can be explained by the fact that L- carnosine is a transmitter of volume information transfer in the olfactory cortex inducing transitions of cell population to more active functioning [3].

Thus, exogenous L-carnosine induces changes in glutamatergic and GABAB-ergic mechanisms of synaptic transmission. The effects of L-carnosine clearly depend on its concentration and have a neuro- tropic nature.

The effects of L-carnosine in the studied con- centrations on synaptic plasticity were associated with complete blockade of LTD. This probably sug- gests that L-carnosine activates endogenous protec- tive mechanisms in brain cells. It can be hypothe- sized that L-carnosine can modify synaptic activity and produce a protective effect in various models of cytological pathologies. The analysis of these relationships is a subject of further investigations.