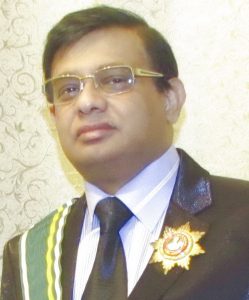 We are holding with you already the XVI WSC. All our previous congresses were devoted to important and topical scientific problems related to the state and development of modern science. The problems of our WSCs are truly inexhaustible, just as the science itself with its interests and problems is inexhaustible.

New important and current scientific problems which we have not yet dealt with and which require our deep and versatile interpretation in the interest of the entire modern science, further establishment of our worldwide scientific authority as a scientific community, and most importantly, the strengthening of peace in the world, will continue to arise before us as pressing problems of the time.

The theme of our current WSC is “Modern Science: Conceiving and Implementing. “And Science for Peace : Global Economy” This theme is indeed relevant, and it is, in fact, not transient for science, being truly fundamental and particularly attractive to it, theoretically and practically, spiritually and materially.

Any scientist always has his own scientific ideas, which he tries in one way or another to put into practice. The ideas are the boldest and most original, and their realization requires considerable physical and mental effort and expense on the part of the scientist. It happens that quite often for the implementation of a scientific idea requires considerable financial investments and the appropriate logistical means. This, too, must be taken into account. And nevertheless the main thing in and for science always remains the intellect of the scientist himself, his creative state and internal equipment by reasoned ideas and principled beliefs.

The most important role in science belongs to the philosophical views of the scientist as the inner spiritual basis and the principal guide in his activity, material and spiritual.

Truly original ideas, theoretically and practically significant, always rest on a solid philosophical basis and, in turn, enrich philosophical ideas about the world and man. Such a philosophy is the “Philosophy of Interaction” (“bialism”), a twenty-first century philosophy recognized in the scientific world. It is now 30 years old, an age quite mature.

I am sure that at our WSC we will get acquainted with many really bold and original scientific ideas, theoretically and practically significant, and the very ways and means of their real and fruitful implementation in the interests of humanity, all and everyone, material and spiritual.

No science of any country can develop in isolation without its organic interaction with the entire world science and with the world scientific community, which we represent at our WSC.

I sincerely wish all the participants of the Congress the real implementation of their most daring and original ideas and new successes and achievements in their fruitful activity for the benefit of peace in our troubled world. I am sure that our scientific activities can really contribute to the establishment and consolidation of a world without violence, a world of all kinds of abundance, material and spiritual.

Thank you for your attention.

Allow me to open the proceedings of our XVI WSC.