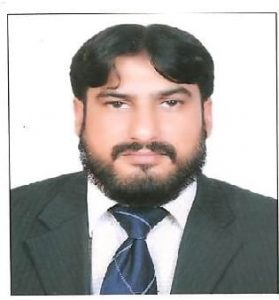 Abstract: –Excipients play a crucial role in the quality of dosage forms. Disintegrants, a widely used category of excipient, have an influence on the dissolution profile of tablets. They act mainly by two mechanisms: either swelling or capillary water absorption. Rapidly disintegrating tablets are prepared by using suitable natural superdisintegrants (SD). The researcher developed the fast disintegrating tablets (FST) by using natural SD with improved patient compliance and convenience. FST by using natural SD overcome the disadvantages of conventional dosage form especially dysphasia in pediatric and geriatric patients.This review discusses some of the most essential natural SD that are used as an excipient in drug delivery systems.

Oral route is the most preferred route for administration of different drugs because it is regarded as safest, most convenient, and economical route. The tablets are the most favored oral solid dosage form In fact, it is more popular dosage form and almost 70% of medicines are dispensed in tablet form (Pahwa & Gupta, 2011) , (Vimal et al., 2014). Disintegration of dosage form are depends upon various physical factors of disintegrant/ superdisintegrant(Shihora & Panda, 2011).

The Ideal characteristic of Superdisintegrants:-

Majority of investigations on natural polymers for disintegrant activity are centered on polysaccharides and proteins, due to their ability to produce a wide range of materials and properties based on their molecular structures (Yadav et al., 2010).

(ii) Biocompatible and non-toxic: Basically, all of these plant materials are reiterating sugar polysaccharides

(iii) Low cost: They are cheaper to utilize as natural sources.

(v) Local availability (especially in developing countries): there is promotion for the production of plants as pharmaceutical excipients being done by government, for bulk production, like gum and mucilage’s.

(vi) Patient tolerance as well as public acceptance: There is less chance with natural materials compared with synthetic one (Kumar ,S.A et al., 2012).

Commonly known as Fenugreek, is an herbaceous plant of the leguminous family and contain a high percentage of mucilage which can be used as disintegrant for use in mouth dissolving tablet formulations. Mucilage is an off white-cream yellow colored amorphous powder that quickly dissolves in warm water to form viscous colloidal solution (Kumar,R. et al., 2009).

The gum is commercially extracted from the seeds ,essentially by a mechanical process of roasting, differential attrition, sieving and polishing. Chemically, guar gum is a polysaccharide composed of the sugars galactose and mannose.

The backbone is a linear chain of 1, 4-linked mannose residues to which galactose residues are 1, 6-linked at every second mannose, forming short side-branches (Chaplin, 2006).

It is used as thickener, stabilizer and emulsifier and good natural superdisintegrant.It has also been investigated in the preparation of sustained release matrix tablets in the place of cellulose derivatives

Mucilage of Plantagoovatahas various characteristics like binding, disintegrating and sustaining properties. Mucilage can be used as natural superdisintegrant to formulate fast dissolving tablets because it has very high percentage of swelling index (around 89±2.2%v/v) as compared to the other super disintegrating property. (R. Kumar et al., 2009)

The separated mucilage was dried in oven at temperature less than 60°C, powdered, sieved (#80) and stored in a desiccators until use (Chakraborty et al., 2008).

Aloe vera  plants were separated out with the help of a sterile knife and homogenized in a blender at 30 rpm. The homogenized mass was separated with a G3 sintered glass filter under vacuum, freeze dried using a bench-top freeze-dryer and subsequently stored at 40°C. The ratio of AVG to lyophilized powder was 200:1 (Turner  et al., 2004).

The leaves were crushed and soaked in water for 5–6 h, boiled for 30 min and left to stand for 1 h to allow complete release of the mucilage into the water. The mucilage was extracted using a multi layer muslin cloth bag to remove the marc from the solution. The mucilage was separated, dried in an oven at 35°C, collected, grounded, passed through a # 80 sieve and stored in a desiccator at 30°C & 45% relative humidity till use (Wahi et al., 1985a,1985b).Natural superdisintegrants Mucilage of Hibiscus rosa-sinensis contains L‐rhamnose, D‐galactose, D‐-galactouronic acid, and D‐glucuronic acid.

Shells were crushed in grinderand then passed though # 60 mesh. The Characterization of GNSP the various phytochemical tests and flow property study of only Ground Nut (Pea Nut) Shells powder was carried out [8].So we can able to use the GNSP as superdisintegrant and formulate the fast dissolving tablet  in low cost and by avoiding the synthetic superdisintegrants (Harrell et al., 2010).

On hydrolysis it yields galactose, rhamnose and galacturonic acid. Gum Karaya occurs as a partially acetylated derivative. It is a dried exudation of Sterculia Uren tree. Its synonyms are Karaya, sterculia, Indian tragacanth, Bassoratragacanth, kadaya, Kadira, katila. Gum Karaya is compatible with other plant hydrocolloids as well as proteins and carbohydrates and act as natural Gum.

Gum obtained from the seeds of Cassia fistula. Carboxymethylation as well as carbamoylethylation of Cassia gum is reported to improve cold water solubility, improve viscosity and increase microbial resistance as compared to native gum contain calcium or sodium salts of carboxymethylated or carbamoylethylatedC. fistula gum as superdisintegrant in the formulation development of FDT.

It is also called Carob bean gum. Some other familiar polysaccharides are starch and cellulose, which are made of long chains of the sugar glucose. In guar gum, giving it slightly different properties.Pharmaceutical application of locust bean gum in various novel drug delivery systems. Locust bean gum has also been reported to have bioadhesive and solubility enhancement properties. There are various reports that Locust bean gum can be used in pharmaceutical as natural superdisintegrant and biotechnological purpose.

. Rather mango peel pectin cannot be used for promising the behavior of superdisintegrants, but due to its good swelling index and good solubility in biological fluids it can be used to prepare fast dispersible tablets (Shihora & Panda, 2011),(Mangal et al., 2012).

Pharmaceutical field as disintegrating agent and as herbal medicine. Seeds contain a major proportion of mucilage, the mucilage can be extracted from seeds by different procedures and its yield varies from 14% to 22%. Mucilage characteristic like binding, disintegrating, gelling etc. The extracted mucilage is used to develop fast dissolving tablets.

It is a linear anionic polysaccharide biodegradable polymer. Gellan gum act as a superdisintegrant and the efficiency of gellan gum is batter as compared with other conventional disintegrants. The disintegration of tablet might be due to the instantaneous swelling characteristics of gellan gum when it comes into contact with water and owing to its high hydrophilic nature.

The complete disintegration of tablet is observed within 4 minutes with gellan gum has been proved itself as a superdisintegrant (Zhang et al., 2010).

These are hydrophilic colloidal substances extracted naturally from certain species of Kelp or chemically modified from natural sources like alginic acid or salt of alginic acid. They are having higher affinity for water absorption and capable for an excellent disintegrants. They can be successfully used in ascorbic acid, multivitamins formulation as Superdisintegrant.

It is the dried gelatinous substance obtained from Gelidiumamansii(Gelidanceae) and several other species of red algae like Gracilaria(Gracilariaceae) and Pterocladia (Gelidaceae). Agar consists of two polysaccharides, agarose and agar pectin. Agarose is responsible for gel vigor and agar pectin is responsible for the viscosity of agar solutions. High gel vigor of agar makes it a potential candidate as a disintegrants (Setia et al., 2011)

It has nutritional as well as medicinal value. The dried and uncooked ficusindica fruit gives 230 kcal (963 KJ) of energy per 100 gm or 3.5 oz. (ounce). It is utilized in assuaging fever, pain, inflammation, wound rejuvenating, blood quandaries, and urinary quandaries.

Mundane name of Mangiferaindicais mango, and it belongs to Anacardiaceae family.It is nontoxic and utilized as disintegrant, binder, suspendingagent, and emulsifying agent in different formulations. The gum powder is white to off white in color, and the powder was soluble in water and virtually insoluble in acetone chloroform, ether, methanol, and ethanol. It is facilely available, and gum is devoid of toxicity, and each and every component of the tree has pharmacological activity like diuretic, astringent, diabetes, asthma, diarrhea, urethritis, and scabies (Alam et al., 2012)

Banana is additionally called plantain. DBP is yare from the variety of banana called Ethan and nenthran (nenthravazha) and belongs to the family Musaceae. It contains vitamin A, so it is utilized in the treatment of gastric ulcer and diarrhea. It withal contains vitamin B6, which avails in reducing the stress and solicitousness. It is a very good source of energy due to high carbohydrate content, and it contains potassium, which is responsible for more preponderant brain functioning(Arun, 2013).

It is a natural superdisintegrant that does not contain any starch or sugar so can be used in nutritional products.  (Iqubal et al., 2014). Evaluated soy polysaccharide (a group of high molecular weight polysaccharides obtained from soy beans) as a disintegrant in tablets made by direct compression using lactose and dicalcium phosphate dihydrate as fillers. A cross-linked sodium carboxy-methyl cellulose and corn starch were used as control disintegrants. Soy polysaccharide performs well as a disintegrating agent in direct compression formulations with results paralleling those of cross-linked CMC.(Younes & Rinaudo, 2015),(Kumar,T. et al., 2012)

Chitosan is produced commercially by deacetylation of chitin, which is the structural element in the exoskeleton of crustaceans (such as crabs and shrimp) and cell walls of fungi. (Bruscato et al 1978) reported that when chitin was included in the conventional tablets, the tablets disintegrated with in 5 and 10 minutes irrespective of solubility of the drug. The disintegration time in the oral cavity as well as wetting time could be analyzed by surface free energy. Chitosan is the best known natural polysaccharide used for its versatile applications as natural superdisintegrant  in pharmaceutical industry(Iqubal et al., 2014).

Pectin is a family of galacturonic acid-rich polysaccharides including homogalacturonan .Pectin is structurally and functionally the most complex polysaccharide in plant cell walls. Pectin has functions in plant growth, morphology, development, and plant defense and also serves as a gelling and stabilizing polymer in diverse food and specialty products and has positive effects on human health and multiple biomedical uses. (Mohnen, 2008).

The New and improved superdisintegrants continue to be developed to meet the needs of advanced tablet manufacturing. It requires the development of various added functionality excipients, which are used to achieve formulations with desired end effects. Until now only superdisintegrants are available to prepare the dosage forms, but now days different blend of excipients are available which can give disintegration property. Someco-processed excipients blends are designed to satisfy the need of more than one excipient.

It involves the mixture blend of more than two excipients to satisfy the required quality using different technique like spray drying and freeze drying.

This is the new excipients based on co-precipitation of Chitosan and silica. The physical interaction between Chitosan and silica create an insoluble, hydrophilic highly absorbent material, resulting in superiority in water uptake, water saturation for gelling formation. Studies have shown that Chitosan–silica delivers superior performance in wet granulation formulations and is the only disintegrant that is effective at all concentrations in tablet formulation.

Glucidex IT is obtained by moderate hydrolysis of starch. It is micro granulated form enables almost instantaneous dispersal and dissolution in water. Different range of Glucidex IT products is available.

All co-processed and modified excipients are playing a vital role in the development of easy dosage forms which are resistant to atmosphere. The improved physical, chemical and mechanical properties of such excipients as compared to existing excipients, have helped in solving formulation problems such as flowability, compressibility, hygroscopicity, palatability, dissolution, disintegration, sticking, and dust generation(Pahwa & Gupta, 2011).

A brief detail about the source and graphical representation of natural superdisintegrants is presented in Table#1,2 and Fig #1.Respectively. 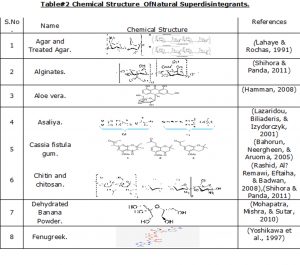 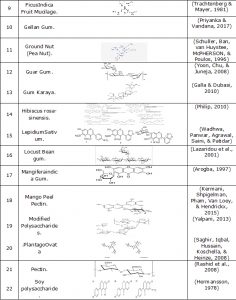 Others Material use as Super disintegrating agents,-

Arogba, S. S. (1997). Physical, chemical and functional properties of Nigerian mango (Mangifera indica) kernel and its processed flour. Journal of the Science of Food and Agriculture, 73(3), 321-328.