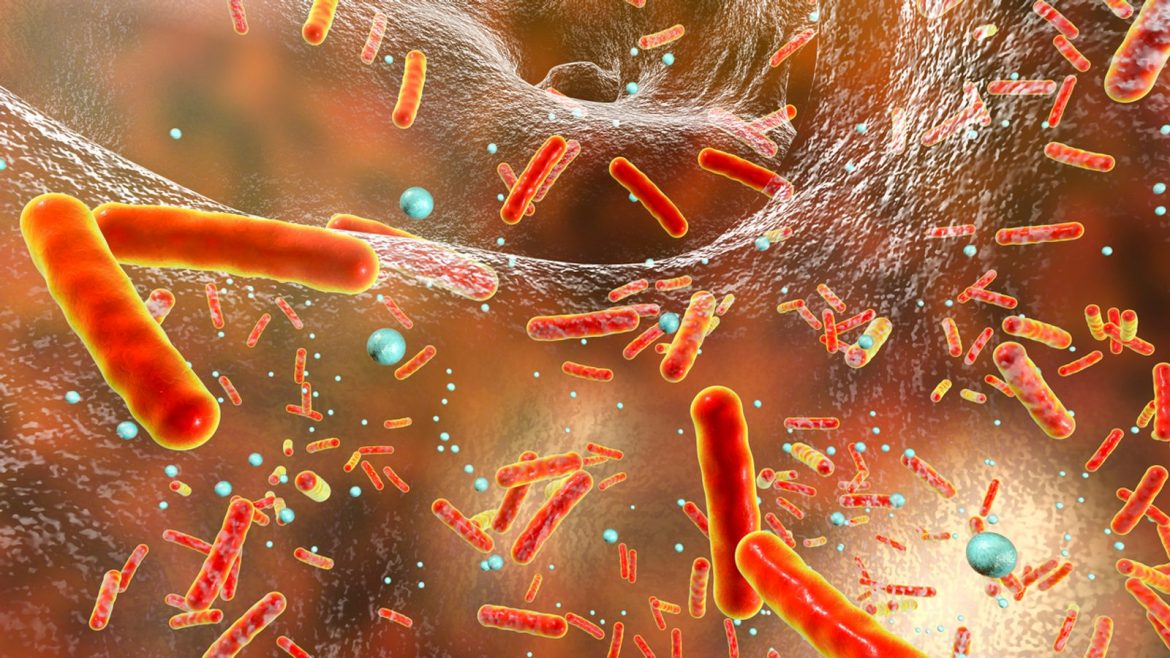 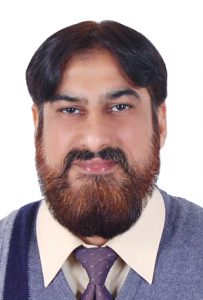 The field of nanotechnology research and innovation related material and devices at the level of atom and molecules. Nanotechnology helpful in solving the human health issues and decreases the cost of manufacturing. Nanotechnologies fabricate, manipulate and manufactured the material into unique properties, which differ from the actual chemical substance size. The health of human being directly affected by the increasement in antimicrobial resistance for those bacteria, which are pathogenic in nature . The world-renowned organization center for disease control and prevention stated that world entering into the period of post-antibiotic, where the most of the world population will lose their life’s by infection of the bacterial rather than oncology. In the recent period of time new emerging tool and techniques can be utilize in combing of such bacteria, which are highly infectious in nature. The problem faced by the traditional antimicrobial techniques even antibiotic resistance can by overcome by recent nanoparticles base techniques. The main focal point of this review is that to indicate different nanoparticles techniques used for the elimination of bacterial infection, for this designing of such elements which play a vital role in the manufacturing of antimicrobial nanoparticles. Not only this, we also emphasized on the nanoparticles surface functionality in orientation of nanomaterial, which participate in the transportation of antimicrobial agents and act therapeutic agent itself.

The peptides of antimicrobial have ability of broad-spectrum antibiotic activity and decrease the risk of resistance. The unique properties of amphiphilic of peptides, head groups of poly-cationic in nature have ability to disrupt the membrane of microorganism. The nanomaterial which fabricated according to antimicrobial peptide and antibiotic methods potentially acting as antimicrobial. Such as, the proper cellular functionality of the cell disrupts when nanomaterial act on the cell membrane and other targeted inner components of the cell. The unique properties of nanomaterial make a novel candidate to boost the therapeutic efficacy against multiple drug resistance infection. The multiple bactericidal pathways are executed by nanomaterial, which make difficult for bacterial to produce desired therapeutic response. It only depends upon the physical and chemical nature of the nanomaterial (such as surface chemistry, size and shape). The nanomaterial make it novel by increase the penetration power in the biological membrane, when coupled with high therapeutic drug and act as carrier of the drug at the point of infection. At the end the nonmaterial modulated the system of bacterial cell, which help to increase the therapeutic efficacy of the treatment. The different factor that depends upon the interaction of bacterial and nanomaterial, for example van der Waals forces, hydrophobic, electrostatic interaction and receptor ligand interaction . For designing of novel antimicrobial agents, the basic study about the interaction between nonmaterial’s and bacterial play a key role in it.

According to the classification of bacteria mainly upon cell wall . (Gram positive and Gram negative).The gram-positive bacteria have thick cell wall due to thick layer of peptidoglycans, which is approximately (50-100nm) with cytoplasmic membrane and teichoic acid. The gram-negative bacteria cell wall contains phosphate in teichoic acids which are polymeric in nature and are responsible for negative charge on gram negative bacteria. In solutions it is act as binding site for the divalent cation. On other side the gram negative comprised of thin layer of peptidoglycans Approximately (20-50nm) and cytoplasmic membrane. In the deep orientation of cell wall contain fluid mosaic module contain two lipids layers consistent of liposaccharide in nature. The property of lipid is that to prevent the entry of water into the cell wall of the bacteria and act as hydrophobic bacterial agents such as soap. In gram negative cell wall of bacteria carry negative charges due to the presence of carboxylates and phosphates present in lipopolysaccharide. The cell wall the bacterial play a vital role in determination if interactions of NPs with microbes. Therapeutic mechanism of antibiotic mainly on bacterial cell wall inhibition, essential protein interfering with expression and disrupting in replication of genetic material . Bacteria have developed resistant ability against these mechanisms of action. The bacterial resistance developed by changing target of the antibiotic. Such as, vancomycin resistance produces by modification in the component of cell wall and tetracycline resistance produce by the alteration in ribosome. Bacterial enzyme can over express for example degradation of antibiotic by b-lactamase and amino glycosides. In addition to it many antibiotic evade by bacterial over expression of efflux pump mechanism. At last, many disease producing bacterial such as Chlamydophila pneumonia escape from the antibiotic due to reside from the cellular compartment of the host cells and mostly present in extracellular space.

The role of delivery vehicle of antimicrobial agents increases the effectiveness of the antimicrobial agent and also bacterial resistance. The antibiotic evades in the mammalian cell by pathogenic bacteria. The infection if intracellular in nature notable treat quickly due to antibiotic availability inside the cell is limited. In other way the design of nanomaterial in such a way to coupled drug to increase the loading ability. Biswas and its co-worker formulation design of highly penetrated nanomaterial by loading medicine tetracycline highly effectiveness for the treatment of intracellular infection of streptococcus aureus. Carboxymethyl groups O-substitute from chitosan polymers and encapsulated with antibiotic tetracycline, by ionic gelation method formation of B200nm nanoparticles of positively charged. In the mechanism cationic nanoparticles in increase uptake in cell of mammalian and enhance the release of tetracycline and binding with bacteria negatively charged membrane.

At infected site pore forming bacterial toxin at abundance, the use of these toxin to stimulate the selective release of nanomaterial base antimicrobial drug delivery vehicle at selective site. Such type of approach kills the toxin secreting bacteria by release of drug at the site of infection without harming to the normal tissues. The design of such type was employed to deliver antibiotic vancomycin at infectious site by using bacterial toxin help to cause the drug release from liposome stabilized phospholipids by gold nanoparticles. Gold nanoparticles coated with chitosan for self-fusion prevention from liposome outer surface, which helpful to release the payload in non-infected environment. When these liposome near the bacteria, which secrete toxin, these toxins penetrate into the membrane of liposome by forming hole for secreting the encapsulated therapeutics. The effect of antimicrobial localized to site of infection. 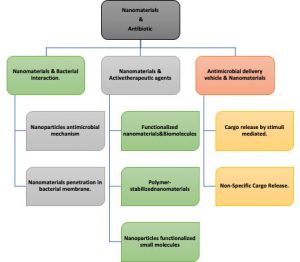 To summarize that delivery of the drug for large range of antimicrobial cargo provides a platform for delivery of nanomaterial at specific target site in a controlled manner.  The issue of toxicity address by nanomaterial drug delivery and adverse effect related to increase dose of therapeutic medicine. Similarly, the in comparisons of self-therapeutic activity of nanomaterial have specific benefits over conventional antibiotic in case of effective treatment and antibiotic resistance.  So, the protective and safety profile of nanomaterial, in long and acute toxicity, need to be every time consider for translation of nano-drugs into clinics.