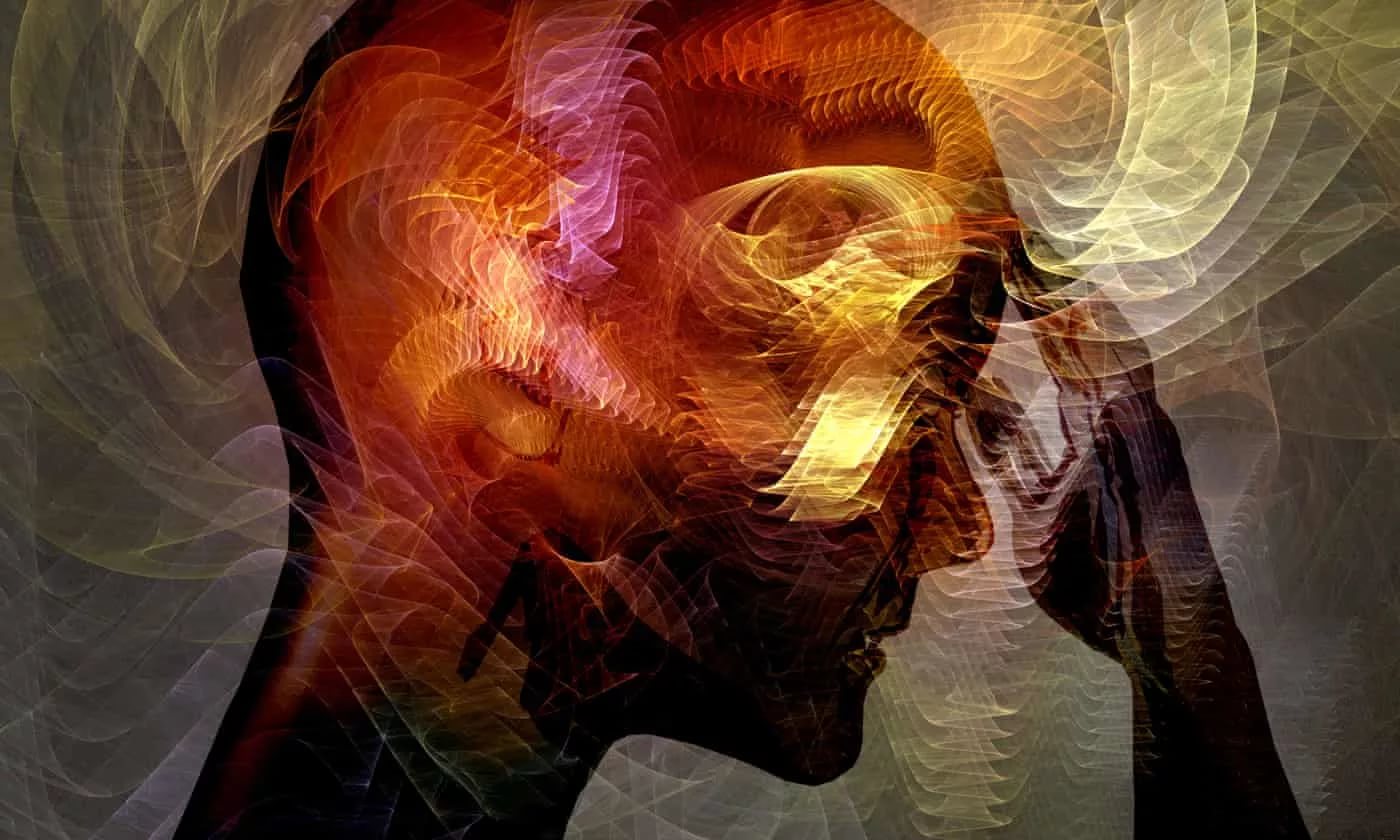 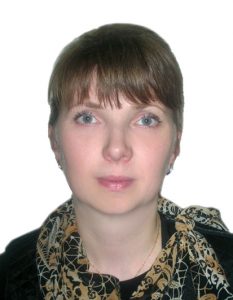 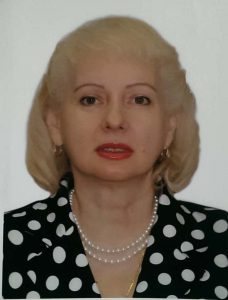 The work used the psychophysiological method of OP Kuzmenko, which allows for both medical and psychological diagnostics. According to this method, in just 5-7 minutes, the power of microcurrents is successively measured with certain diagnostic points by the Rada device. All data is recorded in a special “health card”. The data of the right and left measurement values ​​are connected by a straight line. So it turns out “diagnostic module” (hereinafter – the “module”). If the right and left values ​​are equal – the module is colored green, if the right value is more than the left – red, when the right is less than the left – blue. A “norm corridor” is calculated, which is strictly individual for each.

For a healthy body, all measurements are balanced at the same level and fit into the normal range. Modules that are outside of it, above or below, or red – indicate a clear predisposition or manifestation of a particular disease, its duration and degree of pain. For example, the red color of the modules in the meridians of the vessels (MScr) and the heart (Scr) speaks of problems in the cardiovascular system and at the same time such psychological quality as increased sensitivity. Or the red color of the module in the lung meridian (Rcr.) And in the colon meridian (Gikr) from a medical point of view is colitis, and from the psychological – a manifestation of fear, lack of confidence in their abilities, an inferiority complex.

Different combinations of red modules are also treated differently. Some of them are summarized in the table: “The relationship of psychological and physiological diagnostics on the description of the quality of the modules”.

By combining these modules, one can assess the psychological traits in a comprehensive manner and build a modular psychological portrait. Based on the experience of OP Kuzmenko, who examined more than 144,000 people by this method, taking into account her experience, it can be argued about the sustainability of the picture of each psychological portrait. The more red modules in a health card – the more imperfect a person is, the more susceptible he is to diseases, the less red and more green – the better. And this is an individual picture of psychosomatic and mental functional characteristics inherited or adjusted in the process of education and self-education. Each psychosomatic illness and the corresponding psychological profile of the personality have certain signs in the location of 12 modules in the health card.

Studies in various families have shown that the corresponding module is transmitted to the child mainly from either the father, or from the mother, or by their kind. And if in the diagnostic map this sign of father and mother is the same, then the probability of the manifestation of such a sign in a child increases significantly.

Each family was considered separately, identifying whether any modules were transferred, to whom and to whom and, accordingly, which character traits and psychosomatic diseases were inherited. The results obtained for the convenience of consideration and analysis were summarized in one table for each family. When comparing the health cards of members of one family, the identified matches of modules for some meridians were identified by outlining one color for each of these matches. For example: 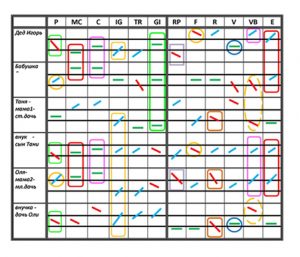 So, in this family there are three generations, these fathers are only in the first generation. By combining matching modules among family members, we see that some of the modules of the parents actually go to the children, and some are already manifested among the grandchildren. 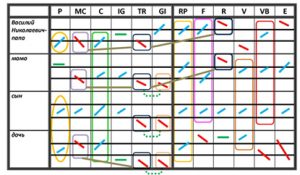 When comparing the diagnosis cards of the father and the mother, one can see the coincidence of their modules along the meridians of the three TR heaters (TR), sex-vascular MC (MC) and kidney R (R).

Father and mother have a disharmonious attitude with the opposite sex, i.e. with each other – a problem with the uterus, ovaries and testes (MC + TR), and hence the creative problems (R). As can be seen from the table – these are the modules that manifested themselves in their daughter. And she also has problems with genital organs and relationships (MC + TR). Uncertainty of the mother and her dissatisfaction with herself passed on to her children.

Dad and mom have sex.-vascular in the meridians and the heart have the same modules (MC + C) – this is coronary heart disease and coincidence in the liver meridian (F), It is a coronary artery disease with a tendency to heart attack. And the daughter modules are the same. Everybody (MC + C + F) has an egocentric attitude towards the opposite sex with flashes of anger. But they are also self-confident personalities (GI), logicians, mistrustful, non-suggestible, non-hypnable (V), strong-willed personalities (IG)

In this family, there are problems between each other, everyone likes to talk, criticize, show willpower, but because of the different attitudes towards money, mother and father cannot find a common language: the father is calm, and the mother is stingy, and besides, everyone has sharp tongue”. Therefore – misunderstanding of each other, touchiness and the daughter inherit too, as a result, everyone can have a heart attack.

This example shows in particular how the daughter inherited the traits of the father and mother and these inherited traits in the child became inevitable. 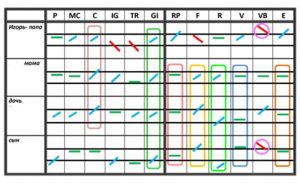 When comparing the diagnosis cards of mothers and children, one can see the coincidence of their modules along the large intestine meridians GI, spleen RP, liver F, kidneys R, bladder V and stomach E.

Children from mom got confidence in themselves, observation, good character, the ability to do everything very well with their hands, “universal brains”, an even attitude to money. As you can see, the children received a good heredity from the mother.

This is a healthy, positive family.

Studies in various families have shown that the corresponding trait (module) is transmitted to the child mainly from either the father or the mother. If in the diagnostic map this sign of father and mother is the same, then the probability of manifestation of such a sign in a child increases significantly. This observation allows us to predict the transfer of specific character traits by gender, from parents to children and, therefore, predict their future psychosomatic diseases and character traits.

The child’s world outlook is special. His soul is thin and vulnerable. We, adults, with or without our fears and complexes, weighed down by the accelerating pace of life, our social, emotional, financial and psychological issues that require a decision and often perceive them as problems, we can not notice, cause serious psychological trauma to children as not yet born, and already appearing and living with us. These injuries adversely affect their future life. They give rise to nervous stresses and complexes in an emerging social personality. Everyone knows that “all diseases of the nerves.” But when children are ill, we are always to blame, adults.

Very often, because of a broken understanding between a student and a teacher, an educator with a pupil, a parent with a child, people grow up with crippled, broken souls and destinies, and even become socially dangerous.

The conclusion that parents should make (biological and not only) is unambiguous: the child’s fate is not determined by genes – they are only responsible for its potential, but they are important, therefore, to conceive and give birth to a child, you need to analyze your qualities, which of them you wanted would see in a child, and maybe some need to change? And in order for a child to realize its full potential, an environment is needed that you can create only – parents!

Here is the task that, in our opinion, faces parents: to get rid of their own negative subconscious programs and try not to program their children’s subconsciousness with unnecessary fears and beliefs.

And “Genes are not a stone on your neck at all. You can change yourself and help your children to be realized”.