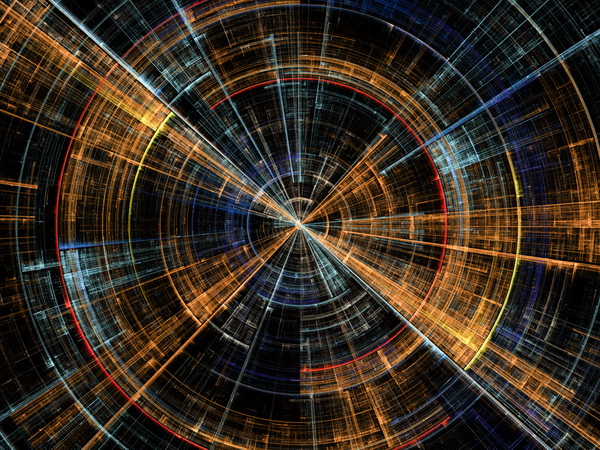 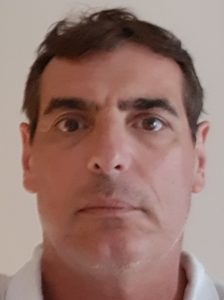 To conduct this research, we use the analysis and treatment 3D-NLS device, able to determine the energetical and physical state of the body with an electromagnetic non invasive detector. Each organ and each cell have specific and distinct frequencies which represent the conditions of the exchange of information between the body and its environment. After measuring the frequential characteristics of the studied biological process, the system compares the degree of spectral similarity between healthy tissues and those which are affected. Then, it compares them to pathogenic agents indexed in resident database to obtain the process or the most probable pathological trend. By combining these processes, a virtual assessment of the pathological systems can be pointed out. Secondly, the 3D-NLS system allows to modify the tissues by sending specific electromagnetic correcting frequencies (bioresonance). 3D-NLS System for telemetric non-linear analysis was developed by the institute of psychophysical practice, in Omsk. It profited from certificates of security in term of level of radiation (system GOST – warranty the harmlessness of the electromagnetic radiations from the device). It can be used like auxiliary diagnosis device, as well as any other electrotechnical device, like a computer for example. It is also approved by the health services of countries like Russia, China, Germany, USA and GB.

3D-NLS device is programmed to detect divergences between an entry signal and an exit on various frequencies, and according to a catalogue of conditions and remedies included in the software. It automatically selects the most similar situations for the analyzed organ/tissue/cell/cellular organelles/DNA. According to 3D-NLS theory, the information exchange between the systems is carried out in a distal, associative and selective way, at the expense of quanta of electromagnetic radiation which have the energy proportion with the disintegration energy of the links of the elementary structure of the system. “During the exchange of information between the systems, the metastable and unstable conditions occur with a probability of disintegration which increases significantly”. The intensity of the exchange of information between two systems increases if one or more of these systems present a disorder. The entropy degree of any system being equivalent to the quantity of information which it contains, the destruction of balance in one of the systems, named A, with a transfer of parallel information with the second system, named B, traces the rules of conservation of the information applied by the theory of the logics of entropy. Theory 3D-NLS established that these reports are true, in terms of physics, only if the system A and the system B are systems of quanta, and the aggregate of shares A and B can be characterized by a state of quanta. The theory also stipulates that the availability of the information exchange occurs before the destruction of one of the systems. Within the framework of the logic of entropy, the two parts are combined in a simple system of quanta in accordance with the effect Einstein – Rosen – Podolski.

Base theoretical system 3D-NLS allows them to explain several details of the fundamental psychophysical mechanisms which are implied in the transfer of information between two objects. It specifies the mechanisms and the conditions which form the associations and the selectivity of information as well as the characteristics of a channel of transfer of information. Device 3D-NLS functions on the basis of the amplification of a specifically chosen signal with the modification of the metastable structures. Due to external magnetic moments of the electromagnetic fields, the cells lose their initial orientation and the structures of rotation of the electrons become disordered. This produces the modification of the instability/stability conditions of the systems, acting as amplifier of the starting signal aiming to the rebalancing of the cells which will regain their function, and will take part thus in maintaining health. From the point of view of physics, the device is primarily an oscillator of electron (cadistor) resonant to the wavelengths of the electromagnetic radiation. Their energy being proportioned with the energy of destruction of the domination links which support the structural organization of a biological object. 3D-NLS use coloured fields for the high frequencies and the infrasounds for the low frequencies, all organized in harmonic ranges. It is possible to integrate within waves of forms of various substances like healthy plants, food, bodies, parasitic or infectious agents, homeopathic agents or minerals.

According to recent researches on transgenerational illnesses and/or psychological disorders, mitochondrial DNA seems to be the « carrier » of these ancestral memories. (4), (5), (6), (7).

Pr Luc MONTANIE (Nobel prize of Medecine 2008) demonstrated that viruses and bacterias can be electromagnetically detected in the blood. (11), (12).

According to these results and to our clinical practice for more than 20 years, we focused on transgenerational information that could be found by analysing electromagnetic frequencies from mitochondrial DNA.

Description of our study

We noticed in our clinical practice that some chronic symptoms as chronic fatigue, headaches, chronic inflammations, certain forms of allergies, psychological stress, behavioural disorders and idiopathic affections like repetitive localized infections are significantly improved when mitochondrial DNA is analysed and treated with 3D-NLS system, and/or other treatments results are improved after quantic therapy.

To illustrate this presentation, we have chosen a clinical case : 58 year old man, hard working (mason), complaining for chronic headaches (2-3 times per week) for 15 years, and chronic lungs and trachea inflammation with coughing. Nothing was found concerning the etiology of these affections through medical, biological and imagery examinations.

We focused on mitochondrial DNA from neurons. The 3D-NLS shows initially the organ that we checked, brain in the chosen example (fig.1). The functional levels of all components of the organ tested  are materialized by a serie of icons, giving a global estimation of the level of adaptation and functional efficiency (fig.2) 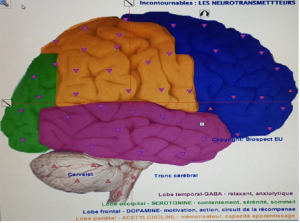 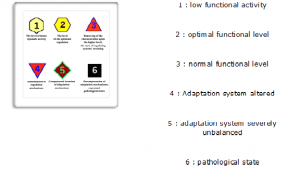 This pictures shows a global alteration of functional and adaptation systems. To access to the mitochondrial level, we must focus on one of the most degraded points : 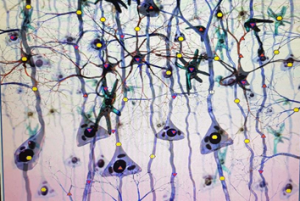 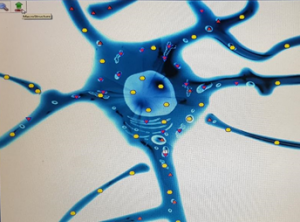 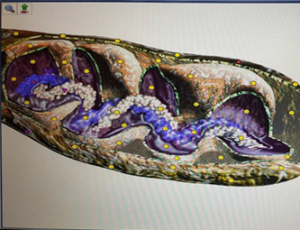 At mitochondrial level, we noticed on mitochondrial DNA a single icon showing an altered functional level (blue arrow). The next step is the frequential analysis of a possible etiologic process. To check transgenerational transmission, the appropriate « tool » is to look at the presence of « nosodes » electromagnetic signatures.

A Nosode is a homeopathic preparation made from a disease or pathological product. Substances such as fecal, urinary, respiratory, discharges as well as tissue and blood products are used in the fabrication of nosodes.

Nosodes are divided in 4 types :

In 3D-NLS system, electromagnetic databases include a wide range of these nosodes. The most significant are shown in red, and above them a second analysis, more precise, allows to select the most probable combination in order to initiate a bioresonance efficient treatment (fig.6) 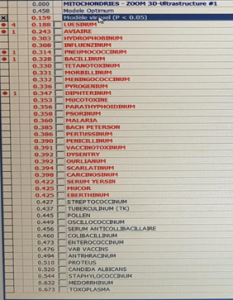 In this case, we can see that the selected nosodes are Luesinum (syphillis), Aviaire (tuberculosis), Pneumococcinum (Streptococcus pneumoniae), Bacillinum (tuberculosis) and diphterinum (diphteria).

A bioresonance treatment with these nosodal data is initiated, and we measure the result by biofeedback with 3D-NLS system (fig.7)

As shown, the global functional and adaptation level was improved by 67%, all icons show an optimal/normal level.

From a clinical point of view, after a 6 months follow up, headaches and bronchial disorders totally disappeared. This patient felt more « energetic », his sleep was improved.

Among the hundreds of cases we have seen and treated, we constantly found these  electromagnetic nosodes signals. Some of them are related to illnesses that have totally disappeared in our modern societies, or at least are very rare, as syphilis, diphtheria or plague. We presume that these « memories » could be « programmed » in mitochondrial DNA and transmitted through generations. Further investigations are to be conducted to confirm this hypothesis.