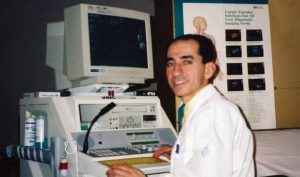 An in vitro model of hemorrhagic stroke in live olfactory cortex slices under long-term influence of autoblood has been used and the development of edema in the samples has been studied with simultaneous monitoring of bioelectric activity of the nervous cells. Protection of the nervous cells in the olfactory cortex slices of the spontaneously hypertensive (SHR) rats from consequences of the hemorrhagic stroke was achieved by incubating brain slices for 20 min in glass vials with 1 ml of incubation solution containing heat shock protein HSP70 at a concentration of 10 mg/ml. Then the incubation medium was replaced by 3 ml of autoblood, the action of which on the nervous cells modeled the hemorrhagic stroke. After 360-min incubation in autoblood, the slices were extracted, placed in a perfusion chamber, and washed from autoblood in a flow of pure incubation solution. Then the amplitudes of separate components of the focal potentials (FPs) evoked by electrostimulation of the slices were measured and their changes analyzed. A comparison of the FP amplitudes after the action of HSP70 and autoblood to those in control group of slices showed the degree of injury and the possibility of recovery. The antiedema effects of HSP70 on the hemorrhagic stroke model was evaluated by weighing brain slices with and without the preincubation with protein, and after the subsequent exposure in autoblood. The slices were weighed on a torsion balance. The difference in weights before and after the exposure in autoblood characterized the extent of swelling and edema development in brain slices. It was established that HSP70 produced a pronounced protective antiedema effect on the slices kept in autoblood.