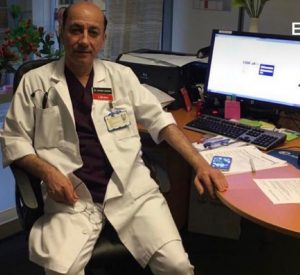 The model of hemorrhagic stroke developed by us on survival slices of the rat olfactory cortex for studies of changes in the neuronal bioelectrical activity after application of autoblood allows to investigate action of biologically active compounds in delayed periods after the start of exposure to autoblood until the moment of irreversible death of neurons.

It has been established, that activity of glutamatergic and GABAergic mechanisms of electro genesis in a rat  brain tissue substantially depends on time of an auto blood action  and long influence until 6 hours leads to almost full inhibition  of exciting glutamate postsynaptic components of focal potentials (AMPA and NMDA) and late inhibitory postsynaptic potential which is generated at activation of slow GABAs receptors.  The level and reversibility of disorders in nerve cell activity in slices were detected by preliminary application of biologically active compounds before the action of auto blood  – heat shock proteins (HSP70) and dipeptide L-carnosine which are notable for the high protective properties. HSP70 is essential for a cell life activity and is extremely actively synthesized in cells at adaptation against many cytotoxic factors. L-carnosine demonstrates high antiapoptotic and antioxidative features in many pathological models.

It has been revealed, that application of HSP70 and L-carnosine in a model of hemorrhagic stroke in brain slices before the beginning of autoblood influence led to almost full restoration of the inhibited parameters of electro genesis of a nervous tissue, thus finding out the high protective abilities of these endogenous substances. Moreover, observable at long outoblood influence significant swelling of slices did not occur at application of HSP70 and L-carnosine, that, apparently, it has been caused by antiedema properties of these substances. On the same model the properties of an ascorbic acids (vitamin C), a calciferol (vitamin D) and an alpha-tocopherol-acetate (vitamin E), and also cerebrolysine and glyatiline which are applied in clinic to treatment of insults also have been investigated. Among these preparations only vitamin E  interfered with swelling of a nervous tissue in model of hemorrhagic stroke on survival brain slices of an rat  olfactory cortex. Preliminary incubation of slices with the alpha-tocopherol before an autoblood application, also as HSP70 and L-carnosine, caused significant antiswelling effect, comparing with delayed periods of an autoblood action (6-8 hours) which is accompanies with  increasing in water content up to 1,5 times.  Such effect was not observed at application of the other investigated preparations – vitamins C and D, and also cerebrolysine and glyatiline. Thus, protective properties of HSP70 and L-carnosine promoted a restoration of neuronal bioelectric activity of brain slices almost completely blocked by autoblood action, as well  as antiswelling properties of these biologically active compounds and also of an alpha-tocopherol have been revealed at use of a model of hemorrhagic stroke on survival slices of an rat olfactory cortex.